Thoughts on TART versus ART

I am writing on this topic because when i studied Osteopathy ART used to be the diagnostic triad we use to help identify treatable areas of the body whereas more recently (in modern education) there has been a rise in the use of TART .  I have discussed why i believe this is so in a previous article (which relates to a more biomedical model) but here, i want to use a little bit of what i call common sense reasoning to examine the two in more detail and flesh out, so to speak, how and in what context both of these concepts may be clinically useful.

Relationship 1: between the tissues causing symptoms and the symptoms themselves:

If we think it through logically T.A.R.T may have some relevance here in identifying treatable dysfunctions in the regional area of the body with symptoms and sorting out local causes from effects.  However, the use of the last T (Tenderness) may be more relevant to determine tissues under load-stress rather than true dysfunctions because although tenderness may be present in many cases there may also be many other cases where the treatable dysfunction is not obviously tender.  Furthermore, Tenderness is something a patient feels in response to our touch and thus is more subjective or symptomatic whereas A.R.T (asymmetry, range-quality of motion abnormality and tissue texture changes) are more what a practitioner feels and thus are more technically signs of treatable areas of the body that show imbalanced relationships.

If we look a little closer at what is happening to the tissues within areas of symptoms, we could deduce that the presence of tenderness would mean that there is some stress upon the structure palpated – either compressive or tensile perhaps, which would technically mean some asymmetry is present.  Assessing the bony landmarks and positioning of surrounding structures and general posture should make evident (i.e. by being shortened, lengthened, sheared or otherwise off balance etc). We, as practitioners would likely also feel some altered texture; i.e. compressive bony or joint tension/hardness – or tensile stretch, taut fibres, shearing strain etc, irritation, puffiness etc – something not completely right in feel at any rate.  Upon motion testing, although active movement might be limited in range (due to being out of position) its quality and further testing on passive movement might actually still be relatively o.k. throughout that range; telling us that the structure is stressed but still coping/functioning – at least until it tears, breaks down and becomes a pathology.  An analogy expressing this concept is that if I pushed you to the left and held you there – your tissues would be asymmetrical and tense but are technically functioning to maintain the uneven posture – i.e. range is limited toward me but free everywhere else – and you might not even be tender until later on when the supporting tissues become fatigued.

Thus, tenderness may be consistent in a symptomatic structure because it is (or has been for some time been) under pressure or load.  But all three of A.R.T may not technically be there (which is what happens a lot, I have found in symptomatic structures) especially if the problem is an adaptive one.   In the case of referred pain, no tissue clues or tenderness may be present.

From this reasoning – tenderness therefore helps to I’D tissues under load (which is what the client feels) but not always the true dysfunctions setting them up.  Continuing on with the analogy above, the real cause of the relationship imbalance would be ‘ME’ pushing you over in the first place and I would likely not be tender because it takes less effort to push you off balance than you, being pushed off balance to maintain an upright posture.  However, if held long enough the tissues would become fatigued and then cause tenderness or discomfort.

When all three of A. R. & T are NOT present then this could reflect the bodies way of telling us the structure or relationship in question is adaptive.  It tells us it is ‘struggling’ and what it is really saying to us if it could talk may be “instead of putting more stress on me by treating me directly can someone please help to take the load off me (by identifying and treating the true contributing causes elsewhere) so I can relax”.  But to do this we need to expand our search to find areas manifesting all three of A.R.T.

Relationship 2: the relationship between everything else going on in a person’s being-posture (spiritually, psychologically, energetically, physically etc – including its relationships with the external world, nutrition, social factors, equipment etc) and the tissues-pathology causing symptoms (either causing, contributing to tissue stress/load or otherwise slowing recovery).

This I call finding the “WHAT ELSE” and it usually manifests in the body mechanically as areas of ‘Primary A.R.T.’ (i.e. it is the physical manifestation of all internalised stresses going on in a person’s life – to internal and external stressors) and is that area or areas of the body which is-are most out of sync with health and most interfering with recovery of the whole person from injury or disease.

Note 1: that I am not talking here about identifying areas of symptoms but rather those areas most interfering with overall health and well being within an individual and which are preventing the self-healing mechanisms from doing their work optimally.

Note 2: I use the word ‘PRIMARY’ dysfunction here to represent the area of the whole person most interfering with the self-healing mechanisms and is causing all other areas of the whole person to compensate in order to maintain as much balance as possible throughout the posture.   This Primary area over time may cause over time other compensatory areas to become likewise dysfunctional (SECONDARY, TERTIARY etc), extending the chain of cause and effect to other areas and which eventually manifest as symptoms in tissues that can’t compensate any longer in order to maintain overall homeostasis.  Thus, again, pain or symptoms is simply the bodies way of saying “I’m overloaded – HELP me please”.

Thus, it can be seen and reasoned that the original manifestation of dysfunction may have all three of ART but if the body can compensate adequately for it (i.e. in other areas which although asymmetrical and show altered texture are still relatively healthy and functional) then no symptoms may initially be present and it may or may not always be tender when found and palpated.  We could say that the real problem hides behind all the compensations and may remain undetected as long as we continue to get distracted by end effects and symptoms and fail to gain the perspective of the whole first.  If this is the case, then technically by standing back to observe-palpate-motion test the whole person then we may be able to trace the effects back to their originating cause and thus not only know which tissues are under load but also gain some understanding of the “how and why” they are under load in the first place (i.e. gain some context).  Furthermore – if an area is compensatory then this would mean that it is a changeable finding; i.e. the texture, symmetry and motion qualities will change in different postures – thus reflecting their adaptable nature (as least prior to them becoming well set in adaptions).   In this case palpable findings will change depending on the postural position assessed.  Whereas a true primary problem may be more masked or more obvious in certain postures (e.g. relieving or aggravating ones) – but they will still technically be present.  This is what we should look for from our assessment (i.e. stable findings rather than changeable ones).

This is the logical reasoning process and I have found that if student learn how to assess correctly (i.e. ask the right questions through observation, touch and motion testing, and how to observe responses accurately to these – i.e. learn the art of listening to the tissues – then symmetry, texture and motion quality are reliable indicators of ‘TRUE’ treatable dysfunctions.  That’s the basis of all my work – to help integrate assessment and help students to accurately listen to and trust the tissues.

The trouble is not with the tissue clues themselves (I.e. the actual tissues findings and the usefulness of A.R.T as a diagnostic tool to find them) but rather how to get students to accurately read the tissues for true or adaptive problem patterns. I have seen numerous cases, for example, where students in clinic have done a full assessment missing all the relevant clues and performed a treatment on the adaptive effects they did find and gotten nowhere.  Then, upon going though assessment again with them and together actually ‘finding’ all the important primary clues (which usually have actually not been previously recognised) and then going back into treatment with an understanding of the relationships between primary tissues and secondary symptomatic ones – that they they get much better results.

So – in conclusion: In my experience – it’s the presence of all three of A.R.T (substituting quality for range) that indicates a treatable dysfunction rather than an adaption.  ART helps us to identify not only key relationship imbalances in the area of symptoms but also more importantly “WHAT ELSE” is going on in the whole person which can help give us context for why the symptomatic tissues are symptomatic to begin with.  Tenderness may tell us there is something going on but it’s the “WHAT ELSE” gives us a clue to important links to help explore the “HOW and WHY’.  Successful treatment to primary areas, tissues and relationships within the whole person, should then help restore balanced relationship (function) to the conflicted tissues and likewise take stress and tension (and tenderness) off compensatory tissues – and thus improving symmetry, function and texture to more normal levels.   Now the symptomatic tissues, can say “Thanks – I now feel much better”

The Basics of Wholistic Assessment 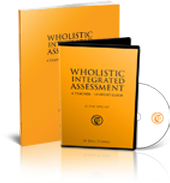